A BRISBANE tech start-up has just received a shock shout out as one of the best of its kind in the world.

Forbes magazine released a list this week of “The 20 Best Cybersecurity Start-ups To Watch in 2020’’ after canvassing nearly 22,000 such companies around the globe.

Only one Australian outfit made the cut and it’s the Cryptoloc Technology Group.

Founder and boss Jamie Wilson told City Beat on Wednesday that he was elated to get the recognition and his email inbox has been overflowing with virtual high fives. His website has also seen a predictable spike in activity. 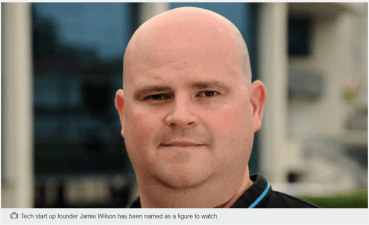 Wilson, who launched the business in 2014, said he had no idea about the win until one of his investors alerted him.

“It’s great news. The recognition on a global stage has been fantastic,’’ the former accountant said. “We’re now ready to just smash it.’’

His point of difference is a patented, world-first software that protects data in the cloud from ransomware, malware and other bugs. Every document uploaded is secured individually with encryption.

The company is clearly on a growth trajectory, enjoying a 27 per cent spike in revenue over the past six months.

With clients in more than 20 countries, Wilson expects turn over will reach about $3 million this financial year and he’s confident about generating his first ever net profit.

Cryptoloc is also expanding overseas, opening an office in Tokyo in March with the assistance of Trade and Investment Queensland. It joins an existing network of outposts in the US, UK and South Africa.

Back home, Wilson told us he’s absolutely confident that the hackers who penetrated the IT system at Brisbane’s XXXX plant this week would have been thwarted if the brewery had been using his service. Over to you Lion!