Medical tech. 'on steroids' at QUT

AN INTENSIVE entrepreneurship bootcamp at the Queensland Institute of Technology (QUT) campus has seen a number of technology start-ups ‘muscle up’ to some amazing medical solutions.

They range from a fashionable pair of earrings that assist women with gestational diabetes – by automatically monitoring and helping to control blood glucose levels – to a device that helps brain-to-bladder function among geriatric patients. 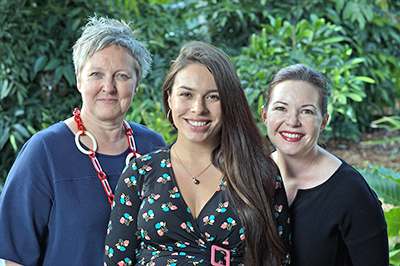 The ideas were developed during an intensive week-long course held at QUT in Brisbane – the MIT Global Entrepreneurship Bootcamp – which attracted 118 entrepreneurial thinkers from around the globe.

Tasked to find novel solutions to some of the world’s biggest global problems, the top two teams were chosen for their solutions to the most personal of medical problems.

MIT Global Entrepreneurship Bootcamp  participants were selected from more than 6,000 global applicants to transform their innovative ideas into burgeoning businesses.

They were put through the rigours of a one-year MIT course, condensed into a seven-day action-based learning experience, led by entrepreneur-turned-educator Bill Aulet, who also wrote the book Disciplined Entrepreneurship.

Brisbane women Tamara Mills and QUT’s alumni Nyree McKenzie and Lee Brentzell were among the top two teams, selected to pitch their ideas to an international panel of venture capitalists from Brisbane, San Francisco and Boston at the conclusion of the bootcamp.

Ms Mills is a second-time gestational diabetic who has a MedTech commercialisation background. She joined Jean Hausser from Israel, Abhishek Appaji from India, Brendan Barbato from the US and Coutney Condren from Australia to form a team called EZBT during the MIT Bootcamp.

Ms Mills said up to 60 percent of women with gestational diabetes did not comply with regular self-monitoring requirements and diet control recommendations and this could have significant implications on the health of the mother and baby.

She said the cost of complications as a result of gestational diabetes in the US is estimated higher than $2 billion per annum and rising.

“We are developing a non-invasive wearable device, a fashionable pair of earrings that not only continuously monitors blood glucose levels without needles and without hassle, but leverages deep machine learning to predict blood glucose response to foods before being eaten, helping mothers minimise complications for themselves and their babies,” she said. 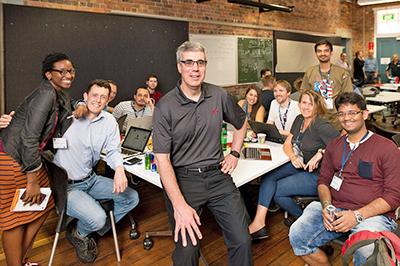 The team filed a provisional patent on the non-invasive blood glucose measurement technology alongside building the working prototype due to be complete in July this year.

“We have had significant interest expressed by healthcare providers and insurance companies across Australia and the US and are actively seeking investment for full commercial development of the technology,” Ms Mills said.

“It was an honour to be named winners of the MIT Bootcamp but we didn’t set out to win but to learn as much as possible about disciplined entrepreneurship and build the foundations of a company that can improve the lives of mothers with gestational diabetes.

“These treatments combined with the more prevalent conservative solutions such as adult nappies lead to a loss of dignity, reduced independence and social isolation for incontinence sufferers,” Ms McKenzie said.

“Our solution overcomes the problem with a discrete, non-invasive wearable device that has minimal side effects.”

She said a functional prototype had been developed which acts to normalise the neural communication between the bladder/bowel and the brain to restore correct function.

Since their debut at QUT the teams have committed to formalising their entrepreneurship journey together.

Ms McKenzie said InConfidence had received interest from healthcare providers and would present the technology to the NSW Department of Health and to Cicada Innovations, an Australian deep technology incubator, for prospective funding.

“We realised that our team is stronger together, and so we’ve also become each other’s board of advisors to keep us all accountable and driven to see our ideas through to market commercialisation,” Ms McKenzie said.

Rowena Barrett, head of the School of Management at QUT, said the MIT Bootcamp helped build Brisbane as a global hub of innovation and entrepreneurship.

“Entrepreneurship is a skill that is being taught,” Professor Barrett said. “QUT is developing graduates who can choose to be entrepreneurs in applying their discipline skills and knowledge to solve future global challenges.”

The State Government’s Advance Queensland program partnered with QUT to bring the MIT Bootcamp to Australia.