JOINLOX has already quietly started a global revolution in materials joining-technologies. Now the Australian innovator is set to apply its award-winning bio-mimicry systems to a global sector of urgent need: infrastructure built on aged and degrading marine piles.

The significance of Joinlox’s PileJax marine infrastructure system is only now dawning upon government and industry owners of critical infrastructure such as road and rail bridges, ports and wharves. 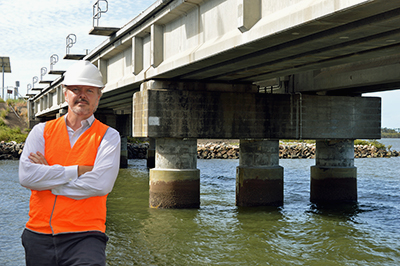 PileJax is an ingenious system that cost-effectively repairs and extends the life by decades of ageing pile-supported assets – a game changer for regions struggling with infrastructure that is near end-of-life or damaged by severe weather events.

PileJax has already been used by Queensland Rail to extend the service life of many of its bridges by decades – and at a fraction of the cost of replacement. So has Gold Coast City Council, with hundreds of bridges across its canal system – most built by developers in the 1970s and 80s – now coming under scrutiny.

Having completed dozens of successful projects around Australia, the company has now launched into the US and Canadian markets where this ageing infrastructure issue has reached crisis point.

Mr Pettigrew said the company had already been accredited by several State transport authorities, US Federal Government bodies and other large infrastructure owners, all keen to leverage off the cost savings of repairing with the PileJax systems instead of facing the huge replacement cost of vital bridges, wharves and ports.

“The problem exists where, say,  you have built a port 30, 40 or 50 years ago and you have been generally maintaining it and painting it and doing what you needed to do,” Mr Pettigrew said. “A bridge or a wharf has typically been built with a design life of 30-to-40-to-50 years, and that timeline is either fast approaching or has, in many cases, been well overtaken. The asset owner, whether they be a private company or a public or government body, really would prefer to get another 25 or even 50 years out of it.

“Rather than having to replace, we repair,” Mr Pettigrew said. “It’s a game changer.”

PileJax is one of those elegant engineering and construction solutions that sounds so simple you wonder why no-one has done it before.

The answer to that is the genius of the Joinlox joining technologies developed by Brisbane-based inventor Dean Urquhart who co-founded Joinlox and who still develops and refines these technologies for the company. Mr Pettigrew often describes the technology as “like a huge industrial strength zipper”.

In essence, Joinlox technology mimics the way clam shells close – with precise ease and strength – and hence its PileJax application completes an installation quickly and without the need for specialised tools.

The technology has also been used to create a wide range of new furniture and hardware assembly products under the Striplox brand, which is set to revolutionise the way construction, cabinetry, furniture, fit-out and other related industries manufacture, transport and install.

“There are plenty of ways that pile repairs have been undertaken to date, whether it be conventional form work or concreting around the piles and wrapping things around them, like bandages and tapes and things,” Mr Pettigrew said.

“What we have just done is taken completely proven FRP (fibreglass reinforced plastic) composite materials, then developed them and manufactured in such a way that they can be joined to form a strong single piece jacket. You have got a pile that is both above and below the waterline, plus it is actually fixed there. You can’t slide something over the top, obviously, because you’ve got a bridge or a deck of some description there.

“So we clean the pile down, whether it be timber or concrete or steel, as PileJax is suitable for all three materials. We fit our jacket over it, in situ.

“We fit fit the jacket using barges on the surface and divers under the water. It’s amazing to think that the biggest cost of all this is the divers in the water. By using our joint, we can actually have our PileJax product fully pre-manufactured so that when it gets to the site it is ready to go – plug and play.

“The diver simply secures it around a pile and within just a few minutes taps in the (Joinlox) locking key. So the only tool required is a rubber mallet and a couple of minutes of diver time versus other traditional means that can involve hours or days to wrap or to encase each pile.”

Each jacket is custom-manufactured for the job and one of the side-benefits is the units could incorporate new styling elements, if required. 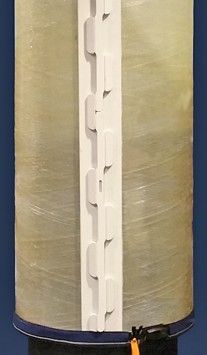 “We may have, say, a wooden pile which could be 500mm diameter and between 6m and 15m high. Instead of wrapping something directly on to the timber, what we do is, if the pile of 500mm diameter, we’ll make our jacket 600mm diameter. So you have got about a 50mm clearance on either side,” Mr Pettigrew explained.

The wooden pile would then be cleaned, and ground down where elements would infringe on the 600mm jacket, then a special fibreglass epoxy mix is pumped into the space between the degraded pile and the jacket.

“That epoxy goes off and cures and bonds the jacket effectively to the pile,” Mr Pettigrew said. “The jacket remains in place to protect and sometimes strengthen the pile and becomes an impermeable barrier to oxygen or water, stopping anything getting in to the pile.

“It arrests the degradation, or the rotting, or whatever it might be, and protects it for another 25 years into the future.”

Joinlox quotes its PileJax life extension as having a design life of 25 years, but that is conservative, Mr Pettigrew admitted.

“If a bridge was built with a 40-year design life, rather than having to spend the money to replace that bridge, if you can get another 20-plus years out of it by spending a fraction of the cost of replacement then that’s when it becomes demonstrable, the savings, from a capital perspective,” Mr Pettigrew said. “That’s really the value proposition of the PileJax products.”

CRACKING US MARKET, FOR STARTERS

Through agents and trade distributors in North America, Joinlox was able to gain traction for its Striplox products – which are currently all manufactured in Australia and exported – and PileJax has also made inroads through representation.

“It is a completely different business model, but PileJax is the product of a bunch of systems that is enabled by the Joinlox technology,” Mr Pettigrew said. “It is productised into a system that may not be a very sexy niche, but it is certainly a very big one.

“We did not sit here and say, little Aussie company let’s go to the US … We actually looked around at all the international markets and started to make some introductions and some soundings. Overwhelmingly the Americans and the Canadians said, you have got to come here … the market is ripe for you guys to be here.

“It’s a very big market that is very accepting of Aussie innovation. We were welcomed with open arms. It’s no cake walk. It’s still bloody hard work. But we have managed to crack that market by selling through a local distributor.

“We market to the asset owners, to the consulting engineers – who are working for the asset owners to repair and remediate their assets – and then to the civil contractors who do the works,” he said. “So we have got a market for all three. Typically our transaction will be selling the materials to the principal contractor but we’ve got to market to and convince all three layers. 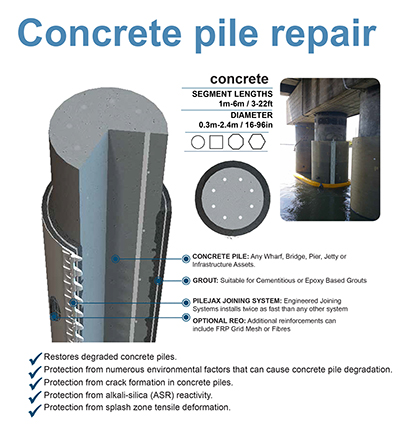 “It is an engineered product, so there is a technical sale, and it is project driven, but our job is to explain it to the asset owners and the project consultants.”

Mr Pettigrew said, on examination, the future of PileJax looked extremely bright, based on the 2017 American Society of Civil Engineers infrastructure report. It showed US ports planned to spend US$154.8 billion in the 2016-2020 period on expansion, modernisation and repair to handle growing trade demands. The Panama Canal expansion would bolster this demand, having opened its Panamax sized locks in mid-2016, he said.

“Coming inland, the opportunities only increase, with the average age of the nation’s road bridges now 43 years,” Mr Pettigrew said. Research identified 56,007 locations – that is 9.1 percent of the US bridge population of 614,387 –were now rated as structurally deficient,” Mr Pettigrew said.

“The investment backlog price tag of US$123 billion (A$164 billion) is the amount of spending required to fix the sub-standard bridges in the US alone.”

PileJax has also sold its system successfully to US Army Corps of Engineers and the Australian company is working with the Corps for future supply.

Joinlox, as a small Australian company,  has been successful in new product markets as much from the collaborative way in which it does business as the innovation built into its products, Mr Pettigrew said.

He could see great opportunities for Joinlox to partner and collaborate with other Australian companies to accelerate markets together..

“I’d like somebody to say, hey, look at what Joinlox is doing … we are kind of doing the same thing … or maybe they could use our technology in their products or we could help them market in the US,” Mr Pettigrew said.

“Whether it be marketing or strategic or technical, we are always looking to partner up and collaborate here and internationally.”

Joinlox has instigated a $5 million capital raise to fund its international expansion plans.

“Increased construction confidence, ageing infrastructure issues and the revival of the minerals sector are all well publicised macro-segments that are in line with our strategies and we feel Joinlox is now well placed capitalise on these,” Joinlox CEO John Pettigrew said.

“This funding round will be used to build the company’s distribution, marketing and presence on the ground to accelerate growth throughout North America and other international markets.

“The company has an enviable pipeline of new products that Joinlox plans to bring to market and penetrate various construction and industry sectors,” he said.

“With such an exciting future and capacity to continue to scale into large export markets, this innovative home-grown company has its sights on a potential IPO in the near future.